On 9 April, Nicola Peltz married Brooklyn Beckham at her Palm Beach family home wearing Valentino Haute Couture—and Peltz’s stylist, Leslie Fremar, says the traditional-with-a-twist wedding gown is the most beautiful dress she’s ever seen. (Quite the statement, considering Fremar is the woman behind the wardrobes of Demi Moore, Julianne Moore and Charlize Theron.)

The Hollywood dresser knows a good gown when she sees one, and even Peltz is in awe of this comment. “Coming from Leslie, that is incredible,” the bride told Vogue, days before saying “I do.”

Peltz’s custom wedding look is the culmination of a year’s worth of conversations with Valentino creative director Pierpaolo Piccioli’s team, two trips to the Rome HQ, and two U.S. fittings. The head seamstresses even journeyed to Miami to make sure every detail was immaculate on the big day. “It was the ultimate couture experience,” says Fremar of cherry-picking elements from various sketches, fabrics and embroideries to create Nicola’s dream dress.
What began as a highly intricate bridal look changed as soon as the bride tried on the toile. “The simplicity of it was magnificent,” recalls Leslie. “We didn’t have to overly detail the dress to accomplish the magnitude of it, so we ended up eliminating the embroidery.” Instead, they added French lace on handmade gloves and an exquisite train that sits over the gown and decorates it like “a work of art.” Fremar says the overall effect is “unbelievable.” For Peltz’s part, she has never felt more special.
Piccioli, who keeps Zendaya in dopamine-inducing looks, was Peltz’s first port of call. “It was a no-brainer,” says Nicola, who has long admired Piccioli’s agenda-setting couture shows and wore Valentino to the Met gala in 2021. That’s not to say she wasn’t reduced to fangirl mode when entering the atelier. “Seeing all the runway dresses in real life was so magic. It looked like someone’s dream closet,” says Peltz of the bright and happy hive of activity run by the talented, detail-oriented Italian craftspeople.
Nicola’s hair and make-up, meanwhile, were an ode to Claudia Schiffer in the ’90s—a decision she made with her long-time glam squad Kate Lee and Adir Abergel, after trials in Peltz’s L.A. apartment where she put a T-shirt over her head to emulate her veil. “I always thought I wanted my hair half up, half down, but we’re going for long bangs with loose, natural hair,” she says of paying tribute to her favourite supermodel, who influenced other outfit choices during the three-day wedding festivities.
The one element of the rigorously planned bridalwear that remained a surprise was Nicola’s “something blue”—a sweet message from her mother, Claudia Heffner Peltz, sewn into the skirt lengths of her heavy Valentino gown. As a gift to her new husband, Peltz sewed a bespoke label into his Dior wedding suit. “Brooklyn loves labels,” explains Nicola. “Two years ago for Christmas, I made a whole suitcase full of personalised ones for him.” These sweet touches (see more fawning in British Vogue’s Mr and Mrs video) are a mark of a couple truly in love.
“Weddings come with many emotions,” shares Fremar. “There’s stress, there’s excitement, there’s nerves… There’s lots of different energies going around. But the clothes are complete.” 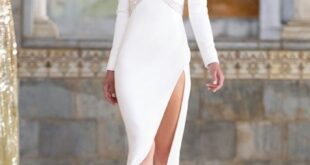